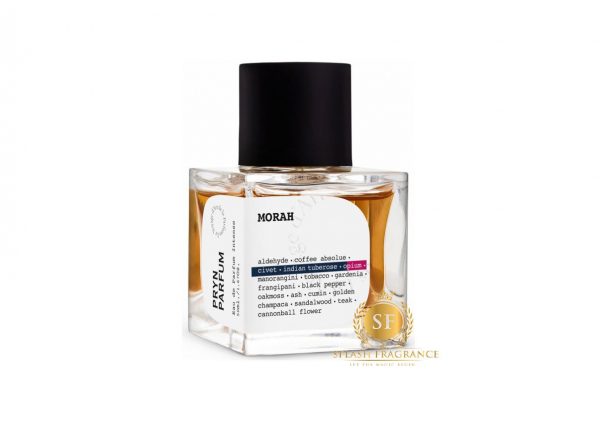 “Morah, PRYN PARFUM’s New Seductive Scent inspired by Thai folklore Chantakorob, whose main female antagonist, namely “Morah“, is notoriously remembered as most ‘promiscuous, unchaste woman.’ The first scent filled with the exotic and subtly arousing essence of native Thai flowers introduces the moment where our ultra feminine looking and all but seductive Morah first appears in the story as by magic from the casket spellbound by the curses. Then follows a first-time encounter with the protagonist, Prince Chantakorob, after him untimely unlocking the precious casket despite the warning. Symbolising the beginning of their forbidden relation—the dangerous liaison. Then comes the woodsy notes as to when enters Morah, now close to be captured by the rugged bandit. Moral is now facing with a difficult decision to make. Instead of taking Chantakorob’s instructions to help kill the bandit, she unexpectedly turned to the bandit, passing him the dagger with which the bandit then uses to end Chantakorob’s life.

On the last note, an hypnotising essence of tempering earthy and wild spices stealthily immerses into the ambiance of the depth of mystic forest, where Morah is abandoned by the bandit who, though by this time having become Morah’s lover, is still dubious about her intention. Left to fence for herself, before long a fragile soul is yet to face one last test. This time, not by man but the above-men, the Holy Indra (Hindu God). Shape-shifted into a hawk winging over Morah, ‘he’ makes her choose to succumb her body in exchange for a string of meat to satisfy her carnal desire. Upon hearing her honest response, the Holy Indra turns sour and puts the spell as a punishment onto Morah, trapping her spirit in the body of a female gibbon…

PRYN PARFUM wants to celebrate, with the this scent, both the strengths and weaknesses of women like Morah, whose total orientation of life is to survive in this wicked world, the world whose whose absolute power lies upon the hand of men. But, be it men or women, is it not our survival instinct that rules over us all? We’ll leave you and your nose to decide for yourself.

A fair warning: In addition to notes detailed above, there is also a hidden note rendered from precious civet coffee seeds. Traditionally harvested seeds with distinct aroma bring in a rather musky yet luxurious, subtly inviting scent, tempered with softly burn spice wood chips. So, dare yourself; and, come open the casket and explore the world of ‘Morah’ with your own senses.” – a note from the brand.

Be the first to review “Morah By Pryn Parfums” Cancel reply