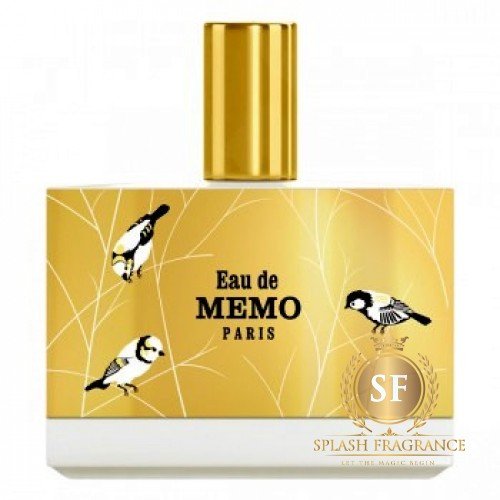 Memo for memory, giving the fragrance a direct link with that state of reminiscence and sensitivity specific to travel and discovery. The expression “The journey is the destination” captures the spirit well.

A bird in flight. Mandarin. The beating of wings, the rustle of feathers. Bergamot. Gliding over Paris. An awakening of early memories, the essential Memo. A hint of leather. The whisper of the city in the sky, a fluttering heart. Oil of orange. A race to ever-greater heights, lost in the big blue. A burst of green tea. The hope of new horizons. Escape. Dive into euphoria, soar above the City of Light. Jasmine absolute. Leave forever, then return, an endless journey of discovery. Lightness and depth. The fragility of contrasts. Forget so as to remember more clearly. Eau de Memo.

Clara and John Molloy, the founders of Memo, met on a chair lift in 2005, between sky and earth, between two worlds, in that weightless space that brings out one’s daring side and broadens horizons. It wasn’t long before they decided to set off together on a long-distance journey. It would also be a creative journey. Memo, which they launched in 2007, was part of the adventure: a collection of scents from afar that now boasts eleven fragrances, it takes a destination and makes it the point of departure for a sense-awakening epic. This choice was guided by their past and their convictions: John Molloy grew up in the bracing Irish countryside, surrounded by horses, before travelling the world to discover other cultures and life beyond working leather and the land. A native of Andalusia, and thus sensitive to outside influences, Clara Molloy forged her love of accents in the shadow of the Eiffel Tower, Catalan pine trees and Swiss mountains. Travel to her is as necessary as breathing, an open book on life.

They saw fragrance as a means of taking a magical journey, extended beyond its end and constantly retravelled. Imagining the bottle as a destination appealed to them. Fragrance has the same rite-of-passage dimension as travel, serving as a threshold between the known and the unknown. Smelling, breathing in a scent, is accepting to leave a safety zone in search of new sensations, and tying them to one’s personal experience. Fragrance kindles an excitement similar to that of a journey, a departure. It is about openness and abandonment.

Clara first called upon great fragrance designers to draw up a sentimental cartography of exceptional fragrances. After writing a book in 2006 on “noses”, those discreet creators, the idea of launching her own brand gradually took shape. During an encounter with Aliénor Massenet, a perfumer with IFF, something clicked. Aliénor had worked for seven years in New York with IFF alongside the great perfumer Sofia Grosjman, before heading to Paris. Her way of combining fragrance, emotion and contrasts was met with Clara’s deep-seated desire, and marked the beginning of their collaboration. The time had come to lift anchor and set sail. Memo would be the name of this pirate ship.

Memo for memory, giving the fragrance a direct link with that state of reminiscence and sensitivity specific to travel and discovery. The expression “The journey is the destination” captures the spirit well.

Clara and Aliénor operate in a to-and-fro and creative emulation, the way you decide on the stages of an upcoming voyage together. Clara for the artistic direction, Aliénor for the creation of each fragrance and its sublimation. Two women who have given Memo the wings it needs to fly in a beautiful formation all around the world.