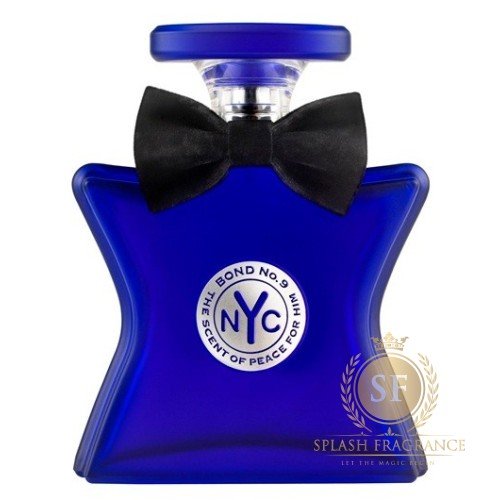 Share
Splash Fragrance > Products > BOND NO.9 > Scent Of Peace For Him By Bond No 9 EDP Perfume

Scent Of Peace For Him By Bond No 9 EDP Perfume

The best fragrances have a well-known calming effect on a deep psychic level. One spray, one sniff, and you’re instantly transported somewhere soothing.

The Scent of Peace for Him by Bond No 9 is a Woody Aromatic fragrance for men. Top notes are bergamot, pineapple and juniper berries; middle note is currant buds; base notes are cedar and vetiver.

Bond No. 9 – Scent of Peace for Him :The best fragrances have a well-known calming effect on a deep psychic level. One spray, one sniff, and you’re instantly transported somewhere soothing. But back in 2006, Bond No. 9 decided to raise the ante on the feel-good sensations that scents produce. Specifically, they devised the world’s first eau de parfum with an overtly civic message—an homage to and a quest for peace. On a macro scale, that meant peace and conflict resolutions among nations; on the micro scale, it meant harmony and equilibrium on personal level. Quickly the grapefruit-lily-cedar-scented Scent of Peace became our Number One best-seller—among women.

The scent is a soothing and assured modern masculine blend, composed of both contemporary and traditional fragrance notes. It begins with classic bergamot—a winter citrus with a soft tang. That’s combined with two new flavors: ripe, juicy, tangy pineapple and juniper berry, hinting of both pine and greenery. These segue into the heart notes: black currant—the fresh and elusive smell of cassis; calming cedarwood; and cool, musty, smoky vetiver—a mainstay of men’s perfumery. The Scent of Peace for Him then evolves into its durable base notes that give it lasting power. Patchouly, ambergris, and musk — a seductive trifecta; plus moss, adding an earthy forest note.

The flacon is a study in simplicity: Allowing the sleek lines and angles of the Bond No. 9 superstar flacon to come to the fore, it is rendered allover in a deep, rich, resonant royal blue—approximating the color of a business suit, and accompanied solely by a jaunty black leather bow tie round its neck. Blue, of course, is the color of peace, stability, tranquility, and calmness, shown by scientific studies to slow the metabolism. Dark blue, in particular, traditionally identified as a male color, is associated with expertise and stability.

Peace, say the pundits, is possible. Bond No. 9’s contribution to the cause is to make it airborne—now for men as well as women.

Buy 100% Original Niche and Designer Fragrances and decants in India at amazing prices with the official site of Splash Fragrance, www.splashfragrance.in. Your one-stop destination for all your fragrance needs in India.