Our customer support team is here to answer your questions. Ask us anything!
Hi, how may I help?
WhatsApp Support !
-9% Off 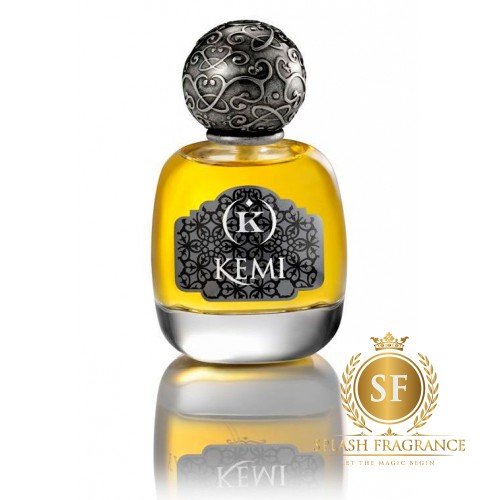 “Kemi” proves to be an oriental composition that knows how to surprise us with unusual ingredients – like looking into strange, unknown worlds.

Kemi’s Eau de Parfum “Kemi” has its roots in the word “alchemy” which is probably derived from the ancient Greek word “chymia” or “chemeia” for “cast metal” or “chymos” for “liquid”, of which the ancient Egyptian word “khem” for “black” or “black earth” is derived. The Arabs adopted this and thus arose “al-Kimiya”. Ultimately however, the exact origin remains uncertain.

It is certain, however, that the creation of “Kemi” was inspired by the powerful Egyptian magicians, because already in the top notes the fragrance appears almost magical. Cedar blends with the characteristic agarwood, to then adopt a completely unexpected facet. In the heart caramel is enthroned, surrounded by balsamic gurjun balsam and slightly animalistic castoreum and civet notes. An extremely exciting combination that’s supported in the base by sandalwood, vanilla and woods.

“Kemi” proves to be an oriental composition that knows how to surprise us with unusual ingredients – like looking into strange, unknown worlds.

Al Kimiya is an influential philosophical tradition from antiquity: The magic science of transformation. The creation of unique perfumes out of rare natural raw elements through unique distillation techniques.

Alchemy is an influential philosophical tradition whose practitioners have, from antiquity, claimed it to be the precursor to profound powers. Perfume as we know it could not have taken shape without alchemy, the ancient art that undertook to convert raw matter in to perfect purified form.

In this sense, it straddles the line between the tangible and the intangible, the earthly and the ethereal, the real and the magical. Islamic philosophers also made great contributions to alchemical hermeticism. The most influential author in this regard was arguably Jãbir (Abū Mūsā Dschābir ibn Hayyān).